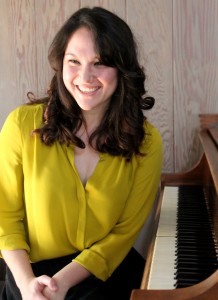 Pianist Renate Rohlfing has quickly established herself as one of her generation's most versatile and sought-after collaborative pianists. Active as a vocal accompanist, chamber music, and orchestral pianist, Ms. Rohlfing has performed with some of the world's leading artists, including James Conlon, Anna Netrebko, Frederica von Stade, Alan Gilbert, and John Adams, among many others. Her performances have taken her to the most prestigious festivals and halls throughout North America, Asia, and Europe, including Carnegie Hall, the Ravinia Festival, London's Royal Albert Hall, and the David Koch Theater at Lincoln Center. Also active as a vocal coach and teacher, she has served on the faculty of Bard College and given chamber music master classes at Westminster Choir College, Ohio University, Rutgers University, Manhattan School of Music, and The Juilliard School pre-college division.

The 2015-2016 Season saw Ms. Rohlfing with Julia Bullock in California, Missouri, Washington DC, Maryland, Vermont, and New York; concerts with her piano trio, Longleash, at Merkin Hall (NY), The German Consulate, the Green Music Center (CA); and recitals with baritone Samuel Hasselhorn at venues in England and Germany's Schloss Elmau. Upcoming engagements include a return to the Spoleto Festival USA, where she serves as a chamber and solo pianist, co-director of the annual Loretto Project-a composition retreat and concert series in Kentucky-with Longleash, and recitals across the USA and Europe. Ms. Rohlfing is a native of Honolulu, Hawaii, and a graduate of The Juilliard School. www.renaterohlfing.com